Cooking with chocolate and cocoa > Cacao, cocoa and chocolate > About the cacao tree

About the Cacao Tree

The cacao tree (Theobroma Cacao) is grown in the tropics in a band between 10 to 20 degrees north and south of the equator, sometimes called the "Cocoa Belt". The tree is often grown in the shades of other trees. It can be as tall as 40 feet (12 meters), and has fruits (pods) which are more than on foot (30 cm) long. The fruits may be brownish-yellow to purple, and contain 20-40 seeds or cacao beans in a pink, sweet-sour pulp.

The cacao tree is cultivated in many countries, but today the leading suppliers are Ivory Coast, Ghana, Indonesia, Nigeria, Brazil, Cameroon, Ecuador, Dominican Republic and Papua New Guinea. Other well-known manufacturing countries are Madagascar, Malaysia, Mexico, some Caribbean islands like Grenada and Cuba, and some Pacific islands like Samoa and Fiji. 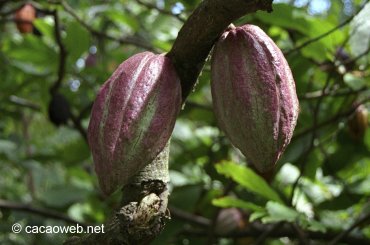 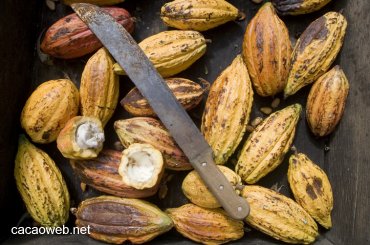 Four major types of cacao are cultivated: Criollo, Forastero, Trinitario and Nacional. The Criollo tree originates in Mexico and Central America and gives very high quality cacao beans and is mainly cultivated in South and Central America. The yield is fairly low. A number of varieties of Criollo are cultivated; in Venezuela well-known varieties are "Chuao", "Porcelana", "Puerto Cabello" and "Carupano". Criollo beans are often mixed with other varieties of cacao when making chocolate.

The Forastero is very much cultivated in Africa, but also in Central and South America and constitutes approximately 80% of world production of cacao. This tree grows faster and gives higher yield than other types of cacao. A number of varieties are cultivated, in Venezuela excellent varieties are "Carenero Superior", "Caracas Natural" and "Rio Caribe". The Forastero "Amenolado" variety produces delicate, aromatic beans and is cultivated primarily in Ecuador.

The Trinitario is a crossbreed between the Forastero and Criollo, and is mainly cultivated in Central and South America and Asia. It has its aroma from Criollo and its resistance to disease and its productivity from Forastero.

The Nacional is mostly cultivated in South America west of the Andes. It is prone to disease and difficult to grow, but has an excellent aroma.

The flavor of the cacao beans is not only dependent on the variety, but also on the soil, temperature, sunshine and rainfall. It is now possible to buy chocolates made with cacao beans from one single region and thus compare the aromas; these chocolates are often called specialty chocolates, in contrast to ordinary chocolate which are made with mostly cheap cacao beans from several regions and with more than one cacao variety.

The Aztecs used the cocoa bean to produce a beverage called xocoatl. The cocoa bean was introduced to Spain in the 16th century. The first chocolate bar was made in Switzerland in 1819, and in 1875 the milk chocolate was invented.